SS7 Attack Explained: What Is It, How It Works, and Prevention Techniques 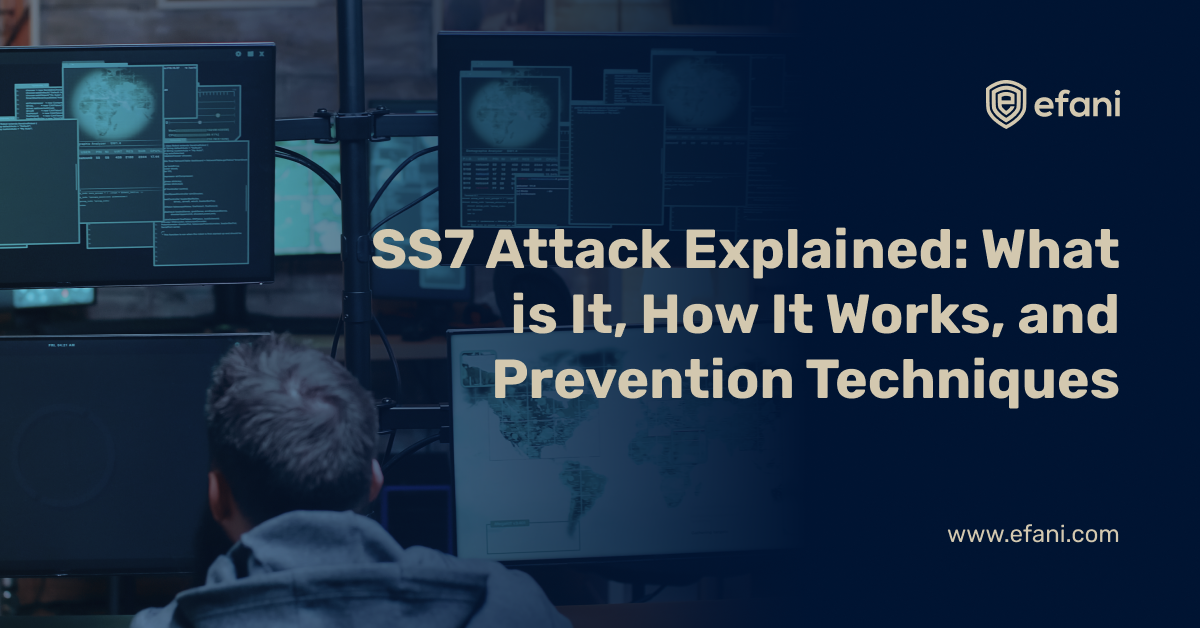 The use of mobile devices worldwide has been steadily increasing from young children who learn to use a smartphone before they can talk to adults whose phones hold crucial data. Nowadays, everyone has at least one mobile gadget they hold dear.

The potential for mobile cyber attacks increases rapidly as 5G technology spreads and advances to larger markets and devices. While a toddler's YouTube viewing habits might not be necessary to hackers, anyone with access to critical data is at risk owing to the global telecoms industry's venerable communication protocol.

The combination of advancing hacking techniques and old legacy protocols creates the ideal environment for enabling harmful actions on congested mobile networks. Therefore, it should be no surprise that mobile malware attacks rose by 50% in 2019 and have since spread exponentially, wreaking havoc on mobile security.

Let's talk about SS7 gaps, one of the major mobile network flaws that have recently threatened customers and network operators.

Complex attacks are being carried out on large networks rather than single devices. From the standpoint of a mobile service provider, after your network's SS7 protocol has been effectively breached, hackers have access to your customer's private data. Without your awareness or the subscriber's knowledge, they can access calls, messages, and the phone's position.

The current standard, since its introduction and adoption in the middle of the 1970s, SS7 (also known as Common Channel Signaling System No. 7 or C7), hasn't made many strides in recent years. It is highly vulnerable to hackers because of its antiquated security principles.

In a sense, SS7's popularity has also become a curse. At least in terms of online security. Everywhere uses the SS7 protocol, the most widely used method of global network connections, due to its widespread use by both mobile providers and intelligence organizations. It is remarkably effective from a monitoring standpoint. Because it gives hackers access to the same surveillance tools used by intelligence and law enforcement organizations, SS7 is a suspect's closest buddy.

How Does SS7 Work?

To allow wireless cellular and wired connection, the SS7 phone signalling protocols are in charge of initiating and ending phone calls across a digital signalling network. Most international public phone calls are made over the Public Switched Telephone Network.

Other apps were gradually incorporated into SS7. This made it possible to roll out new mass-market solutions, including call waiting, SMS, prepaid billing, number translation, call forwarding, local number portability, and conference calling.

The SS7 Protocol Stack's constituent parts and modules include:

What Is An SS7 Attack?

SS7 attacks are mobile cyberattacks that breach and intercept voice and SMS messages on cellular networks by taking advantage of security flaws in the SS7 protocol. SS7 attacks target mobile phone communications rather than wifi broadcasts, much like a Man in the Middle attack.

How Does An SS7 Attack Work?

SS7 attacks use the capabilities of communication systems that are built on top of the SS7 protocol to authenticate themselves to snoop on text and voice communications. A Linux-based system and the SS7 SDK, which can be downloaded free of charge online, are all a hacking group would need to start an SS7 strike.

When a hacker connects to an SS7 system, he or she can start targeting customers while deceiving the network into believing the attacker device is an MSC/VLR node.

When an attacker uses a MiTM spoofing assault effectively, they have visibility to the same kinds and quantities of data that are typically only available to security agencies. Hackers can acquire helpful information by listening in on texts, calls, and locations.

SS7 attacks are a widely used security measure. Due to the unencrypted nature of these SMS communications and the ease with which hackers might acquire them, 2FA (two-factor authentication) over SMS utilizing SS7 is fundamentally faulty. A malicious user may be able to tweak your password for your WhatsApp, Google, Social Media, or even bank account with the passcode from the SMS in their possession.

How Do Attackers Carry Out An SS7 Attack?

You must establish a connection to the SS7 network and launch an app to fool the network connection of an initial subscriber into thinking that code is a roaming MSC/VLR node in a network to receive messages and calls using the SS7 attack.

After connecting to the SS7 system, you should create your own SS7 app or purchase an existing one. To create the ss7 hacking software, you must have the SDK that offers the necessary ss7 libraries and stacks.

As a phone joins a roaming network, you must first enrol the app. You will need the IMSI from the sim card associated with the mobile number. While anyone can quickly obtain a mobile number, it can be challenging to obtain IMSI information. You must employ the IMSI catcher tool to obtain the IMSI information of the person's mobile phone number. The HLR then responds by sending the IMSI and roaming data after receiving the SRI-SM and contact information from the HLR.

The area code and country code are part of the roaming details. From the IMSI information, the SS7 hacking app constructs the status update together with other variables, and after that, it launches a TCAP discussion with the SS7 node.

The SCCP calling and called party addresses must be filled out. The called party address is generated from the IMSI, and the calling party address is the GT of the software program. The HLR will reply with Insert Subscriber Data during Update Location. For the update location method to succeed and the app to attach as a smartphone, the application software must recognize the ISD to the HLR. However, enrollment is complete after the HLR transmits an updated location ACK.

Once this is done, hackers can pose an SS7 attack your calls, texts, WhatsApp, Facebook, and other apps.

How to Prevent SS7 Attack?

The SS7 system's vulnerabilities and risks are outside the purview of organizations, consumers, and small businesses. Because of this, SS7 flaws cannot be easily corrected or deleted.

Mobile phone network operations should prioritize education and awareness, according to the GSMA. Customers will secure their phones and IoT devices due to the increased consumer focus on security controls. Especially regarding essential services and programs like Smart Homes and Offices.

The only way to prevent an SS7 attack is to shut off your gadget, but you already know it's not a wise option. So, here is what to do:

SMS-based 2FA is not secure, yet it is widely used. Companies and services that value security is shifting away from SMS and offering consumers new means of user authentication that don't rely on dated phone standards like SS7. Combining several different authentication techniques can reduce the likelihood of an SS7 attack by more than 90%.

If an SS7 system is successfully breached, businesses must be able to keep track of what is happening. They must be kept up to date on security incidents that affect both corporate systems and devices. Any company mobile security plan must include this. In the end, companies need to put in place a defence that spots risks and reacts before any harm is done.

Even when using automation, information security is not a one-time process. Cybercriminals constantly develop new vulnerabilities and strategies to infiltrate systems to steal sensitive data or hold devices captive. Patch management that is efficient is essential and enhances adaptive defence. Using real-time endpoint protection analysis, businesses may ensure that known security flaws are patched quickly via firmware and software updates.

Knowing your attacker and potential attacks is the first step towards neutralizing it. It's crucial to know how often hostile actions like SS7 attacks are and to take necessary precautions to avoid them.

However, given the sheer number of people using mobile phones, there is likely little chance that hackers will target you for monitoring. However, your odds are far greater than those of the ordinary person if you are a company's CEO, a doctor, a lawyer, or someone carrying critical private data on your mobile device. You may risk being hacked if you still use SMS-based 2FA for financial services.

One could only hope that advancements in telecom will shield us, the end users, given how simple it is to carry out an SS7 assault and the harm a successful one may cause to both the target and their phone company. Luckily, Efani provides you with the solution by preventing SIM swap attacks and other security flaws like SS7 attacks, eavesdropping, and location tracking.

Read more about A SIM Swap Attack and Its Prevention Techniques.